Photographs serve the illusion of realism, of showing the Eiffel Tower or the bombing of a Vietnamese village as it really was. Perspective strongly supports this illusion. It denotes three-dimensional space on the basis of construction rules that have been derived from optics. A camera basically follows the same optical laws we find at work in the Renaissance theory and practice of perspective. It is a machine for making central perspectives, very much like the devices contrived by Dürer and others to facilitate the drawing of perspectives. 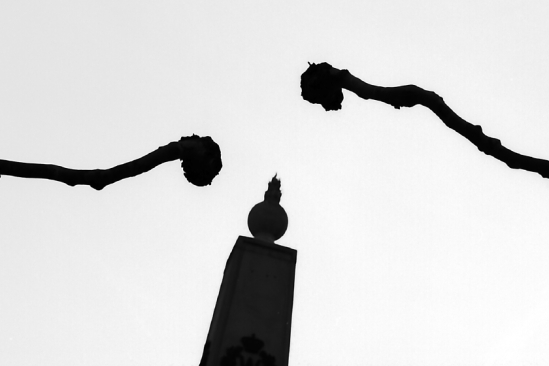 Perspective does not only denote space. It also positions the spectator: Central perspective works best if you stand right in front of the picture’s vantage point. You are thus made part of the geometrical arrangement; your (ideal) position, your eye is inscribed into the picture. For the image to captivate you and work its illusion, you have to cooperate, positioning yourself accordingly. Illusion comes at the price of a loss of freedom for the spectator.

Would absence of perspective, emphasizing the picture‘s flatness, then mean that spectators regain a certain amount of freedom, being allowed to stand wherever they like, without missing anything?

If this were the case, speaking of Informel paintings as ‘democratic’ may not only cover the picture elements (which are all equal) but also the ‘positioning’ of spectators. Confronted with a painting by, say, K. H. Sonderborg, spectators can position themselves freely, they can pick any spot in front of the picture they like. There is a certain openness to this, some kind of laissez-faire a Renaissance painting following the rules of central perspective might lack.

2 thoughts on “Stand There!”